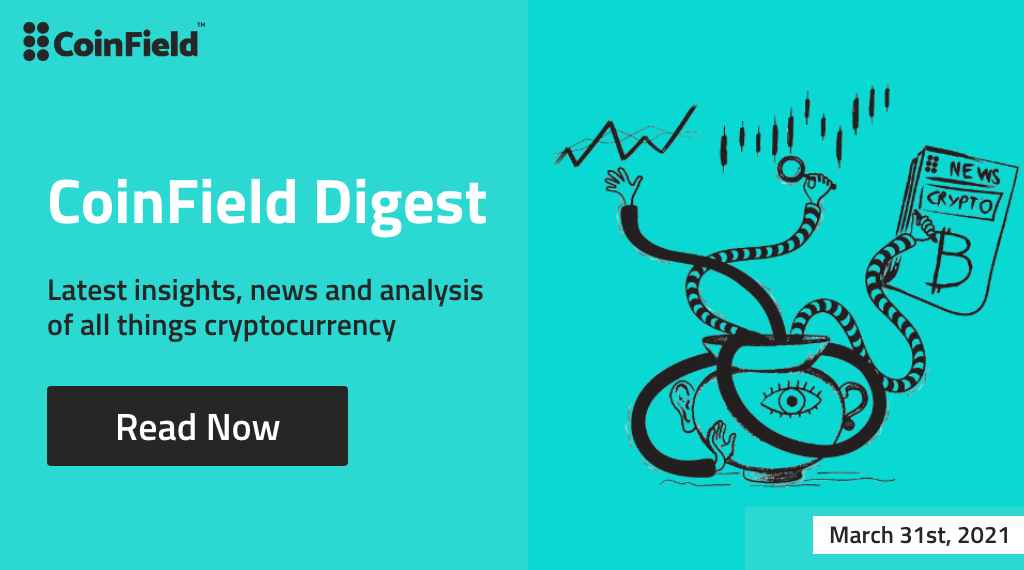 This week, the price of Bitcoin continues to climb alongside the worldwide acceptance of digital currency as a form of payment. Companies like Tesla and VISA have begun shifting their businesses practices to utilize the digital gold for payments and services, bringing into question the future value of fiat currency.

Let’s take a closer look at the hottest news in crypto this past week.

Senior strategist at Bloomberg Intelligence for commodities, Mike McGlone, said that he predicts Bitcoin to reach $ 400,000 this year.

According to McGlone, the bullish rally of the first cryptocurrency in 2021 corresponds to trends in 2013 and 2017. McGlone adds that if the scenarios are repeated, It is assumed that the price of Bitcoin will reach $400,000 within the next 9 months.

McGlone indicated that investors may soon start seeing the first cryptocurrency as a defensive asset to reduce financial risks.

Earlier, the chief investment officer of Soros Fund Management, Dawn Fitzpatrick, said that as a result of the epidemic and the economic crisis, Wall Street players had begun to take cryptocurrencies seriously. According to Fitzpatrick, investors have shown an interest in Bitcoin due to concerns about the devaluation of the fiat currencies.

Payment giant Visa, together with cryptocurrency service Crypto.com, launched a pilot program to conduct international transactions using the USDC stablecoin on its network.

According to the press release, the partners have already completed the first test transaction in USDC. Hong Kong-based payment company Crypto.com has sent tokens to the Visa address through crypto custodian Anchorage.

According to Visa, cryptocurrency payments are usually converted to fiat currencies when making payments, which implies certain complications and costs. The new service, based on the Ethereum blockchain, will allow avoiding the preliminary conversion of digital currencies into ordinary money.

Chief product officer at Visa, Jack Forestell, described the transaction as a significant achievement. He added that this step will meet the needs of fintech companies and neobanks that need to conduct transactions in stablecoins or conventional cryptocurrencies.

Two weeks ago, chairman and chief executive officer at Visa, Alfred Kelly, said that cryptocurrencies could begin to be widely used as a means of payment in the next five years. According to him, stablecoins have the prospect of becoming a new payment mechanism, especially in emerging markets.

In December 2020, Visa connected its global network to USDC and announced the release of a card with support for payments in stablecoin.

US investment bank Goldman Sachs has filed an application with the US Securities and Exchange Commission (SEC) to issue bonds, the yield of which will be tied to the results of the ARK Innovation ETF. An exchange-traded fund, actively managed by ARK Investment Management, is formed by shares of a trust that owns Bitcoin.

The filing notes that an ETF may have access to cryptocurrencies not directly but through a trust. The ARK Innovation ETF includes stocks of technology companies that develop revolutionary technologies, including blockchain.

The bank plans to offer $ 15.7 million automatically callable conditional coupon bonds linked to ETFs, maturing in 2026. The bond payout will depend on the effectiveness of the ARK Innovation ETF. Early repayment is possible upon the occurrence of certain conditions.

In early March, Goldman Sachs President John Waldron announced that the bank was looking for opportunities to meet the increased customers’ demand for Bitcoin. He added that investors’ interest in digital assets continues to grow.

It is reported that the SEC recently began considering VanEck’s application for the launch of a Bitcoin ETF.

Also on March 17, the major US investment bank, Morgan Stanley, became the first bank in the United States to allow customers to invest in funds whose assets are only cryptocurrencies.

On Wednesday, March 24, Elon Musk announced the start of sales of Tesla electric cars for Bitcoin in the United States.

The entrepreneur added that the option will become available outside the US later this year. According to Musk, the company has no plans to convert cryptocurrency into fiat money. Musk stressed that Tesla has its own nodes.

On February 8, Tesla announced its intention to add the ability to pay with cryptocurrency to the US Securities and Exchange Commission (SEC). Meanwhile, the electric car manufacturer revealed that it had invested $ 1.5 billion in Bitcoin.

Musk stated that Tesla’s actions do not directly reflect his views, since he considers Bitcoin “simply a less stupid form of liquidity than cash savings.” The founder of Tesla and SpaceX admitted that investing in a $ 1.5 billion cryptocurrency is recklessness for a company from the S&P 500.

On February 21, Wedbush Securities analyst, Daniel Ives, revealed that Tesla’s paper profits from Bitcoin were higher than the profits it made from sales of its electric vehicles (EV) in the whole of 2020.

That’s it for this week, thank you for reading! Stay informed about how Bitcoin, Cryptocurrencies and Digital assets are transforming the global economy with the weekly CoinField Digest newsletter!

CoinField has one goal in mind: to make cryptocurrency accessible worldwide. Our mission is to take the crypto ecosystem to the next level by enabling everyone worldwide to participate in cryptocurrency markets in a fully regulated, efficient, and accessible manner. Sign up today to start trading. Go to www.CoinField.com.