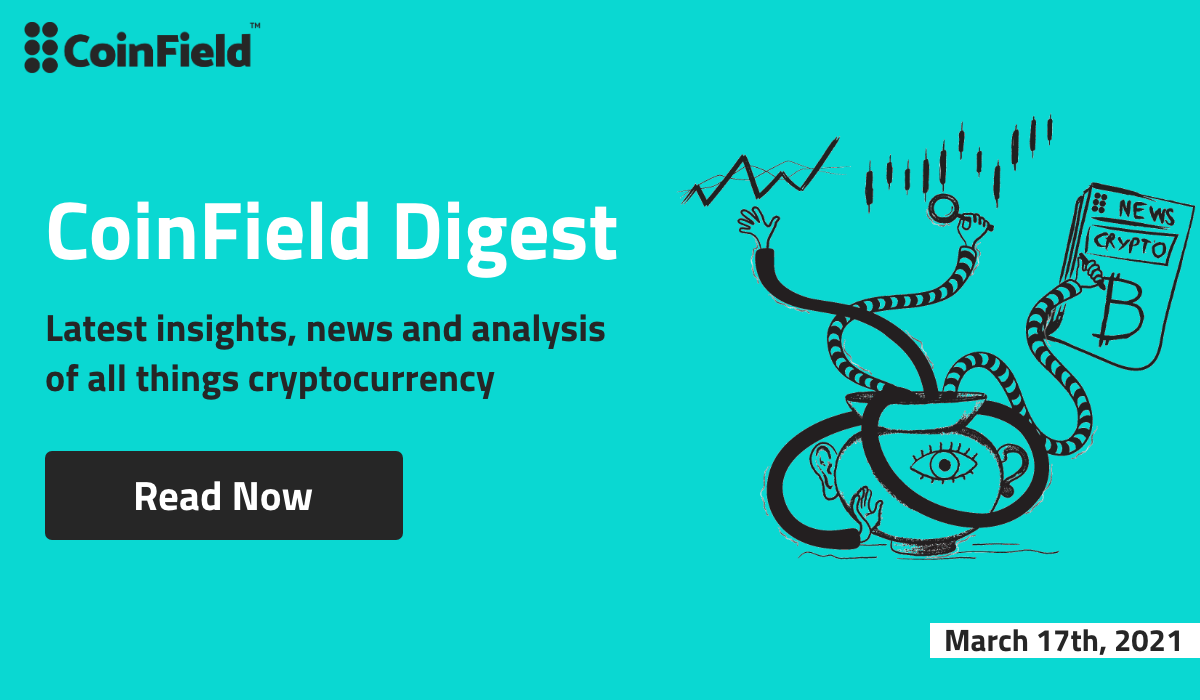 This week, as Bitcoin prices continued to reach new heights we saw large conglomerates invest millions into cryptocurrency. While some banks determine if altcoins are going to experience the same growth as BTC, investment banks are also under increased pressure to adopt this new digital currency to meet customer demands and remain competitive in the market.

Bitcoin crosses the $ 60,000 mark for the first time in history

Bitcoin price crossed the $ 60,000 mark for the first time in history. At the time of writing, the price of the first cryptocurrency reached $ $60,065.15, according to CoinMarketCap. Over the past day, Bitcoin has increased by 6%. According to CoinGecko, its capitalization has risen above $ 1.1 trillion.

MicroStrategy CEO Michael Sailor said the company bought 262 Bitcoins for $ 15 million ($ 57.14 per coin). Thus, the number of digital coins owned by MicroStrategy increased to 91.33 thousand. The company spent $ 2.21 billion on its purchase. The average price of one purchased Bitcoin was $ 24.21 thousand. At the current exchange rate, the company’s “paper profit” was $ 2.9 bn.

Goldman Sachs President John Waldron said in an interview with Reuters that the bank is looking for opportunities to meet the increased customer demand for Bitcoin. Investors’ interest in the main digital coin continues to grow, he said. Waldron believes that the pandemic and related restrictions have fueled the popularity of e-commerce, and the use of digital currencies will inevitably grow with this sector.

The head of Goldman Sachs also noted that the investment bank is studying the issue of how to meet the growing demand of customers who want to invest in Bitcoin, and at the same time comply with regulatory requirements. According to him, the investment bank is constantly involved in discussions with regulators and central banks about how banks should be regulated when working with digital assets. In early March, Goldman Sachs relaunched the cryptocurrency trading platform and started trading Bitcoin futures.

JPMorgan will unveil a basket of stocks of cryptocurrency-related companies

Investment bank JPMorgan will present a new product – a basket of shares of companies related to cryptocurrency. The financial conglomerate submitted the relevant documents to the US Securities and Exchange Commission (SEC). The instrument will feature securities from MicroStrategy, Square, PayPal, Riot Blockchain, NVIDIA, AMD, TSMC, Intercontinental Exchange, CME Group, Overstock, and Silvergate.

The largest 20% stake in the basket will be reserved for MicroStrategy securities. According to Bitcoin Treasuries, the public company owns over $ 4.8 billion in Bitcoin. JPMorgan emphasized that the new product is in no way associated with any specific cryptocurrency, including Bitcoin, and may not correlate with the dynamics of the digital money market.

Payment giant PayPal has confirmed plans to acquire crypto storage infrastructure provider Curv. This is stated in a press release from the company. PayPal expects to complete the deal in the first half of 2021. Its terms were not disclosed. The company said the agreements reached will accelerate and expand PayPal’s cryptocurrency and digital asset initiatives. According to various estimates, the deal amounts to $ 200 million to $ 500 million. As a reminder, on November 11, 2020, PayPal launched the purchase and sale of bitcoin for US users.

Anthony Scaramucci, the co-founder of Skybridge Capital and ex-White House communications director, said that he is only interested in Bitcoin and not other cryptocurrencies.

In an interview with Decrypt, Anthony Scaramucci explained why, of all digital assets, he is attracted only by Bitcoin. First of all, Bitcoin’s market capitalization has exceeded $ 1 trillion. The first cryptocurrency has already turned 12 years old, and during this period, Bitcoin has about 8,300 rivals claiming its place.  Despite this, bitcoin is still the first cryptocurrency in every sense of the word. On January 4, 2021, the Bitcoin-based SkyBridge Bitcoin Fund LP was launched. It was difficult to attract investors to Bitcoin due to its volatility, Scaramucci said. As for other altcoins, there are even more similar concerns among investors. Therefore, the founder of SkyBridge is convinced that the first cryptocurrency has a much better chance of getting into the portfolio of traditional investors.

Scaramucci believes that in order to spread bitcoin, it is necessary to provide people with as much information as possible about crypto assets. Scaramucci teamed up with Skybridge COO Brett Messing to hold regular conferences about bitcoin, talking about its ups and downs, risk management, and cryptocurrency investments from major investors such as MicroStrategy and Tesla. Messing recently suggested that Bitcoin could get to $ 100,000 over the next year and a half.

That’s it for this week, thank you for reading!

Stay informed about how Bitcoin, Cryptocurrencies and Digital assets are transforming the global economy with the weekly CoinField Digest newsletter!

CoinField has one goal in mind: to make cryptocurrency accessible worldwide. Our mission is to take the crypto ecosystem to the next level by enabling everyone worldwide to participate in cryptocurrency markets in a fully regulated, efficient, and accessible manner.

Sign up today to start trading. Go to www.CoinField.com.