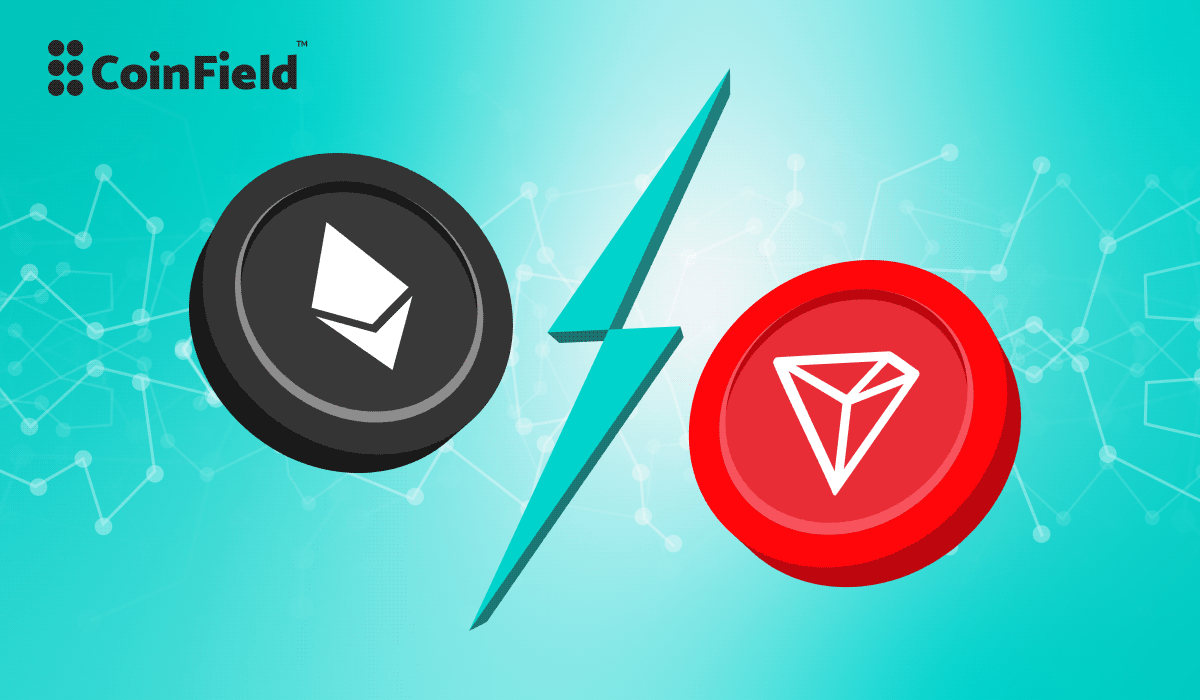 Vitalik Buterin’s Ethereum and Justin Sun’s TRON are both renowned for their adaptability and functionalities. But when pitted against each other, what could be the key highlights to note about these two blockchains? Read more to find out.

Ethereum and TRON are two powerful platforms that provide functionality for smart contracts and decentralized applications. Their respective founders Justin Sun of TRON and Vitalik Buterin of Ethereum regularly clash on social media, so we’re putting them head to head to see which is better, Ethereum or TRON?

Ethereum is the second-largest cryptocurrency by market cap behind Bitcoin. It is a blockchain with a built-in programming language, and it is more than just a payment system. The platform’s capabilities are endless and used to run smart contracts and decentralized applications. It is home to 260,000 cryptocurrencies built on its blockchain. Due to its decentralized nature, there is no risk of fraud, censorship, or intervention.

The cryptocurrency Ether is the fuel for the decentralized apps on the Ethereum platform. Anytime a user wants to make a change to an app on the platform, there is a transaction fee. The fee is automatically calculated based on how much “gas” or computing power it takes to make said change.

Justin Sun created TRON in 2017 and opened an Initial Coin Offering (ICO) in China then raised $70 million. TRON’s goal is to make the internet fully decentralized.

Much like Ethereum, TRON is also a platform capable of smart contracts and decentralized applications. Originally TRON was built on Ethereum but then moved to an independent network. Later it was marketed as the latter’s competitor, which helped its value rise. TRON was accused of plagiarizing the Ethereum white paper, which TRON denies.

Justin Sun has taken several swings at the rival platform on Twitter, claiming TRON to be superior. He and Vitalik Buterin regularly clash on the social network with their respective followers in tow.

What Are the Key Differences?

While these two platforms are incredibly similar, there are some differences, as outlined below.

Ethereum uses a Proof-of-Work (PoW) algorithm like Bitcoin, which means that miners use computational power to solve mathematical blocks. The first who does broadcast it for other nodes to validate and add the block to the blockchain while the miner receives a reward. This process is labor-intensive with high electricity and energy costs. The platform has plans to move to a Proof of Stake (PoS) algorithm instead of the upcoming launch of Ethereum 2.0.

TRON already uses a PoS algorithm, which is far less intensive. A rotating cast of 27 “super representatives” validates the transaction on the blockchain. With PoS, miners need to stake their coins to participate, and it’s argued that this makes for a fairer system, because everyone who stakes has a chance of receiving rewards. The environmental costs are also significantly lower.

Ethereum is implemented in Go, Rust, C++, Solidity, and its decentralized applications support Solidity. TRON was built with Java, but it supports more programming languages than Ethereum. Java, Scala, C++, Python, and Go are all compatible.

While TRON is gaining popularity, Ethereum is still a solid choice for developers. It has the most prominent developer community in the blockchain space, which is evident from the 260,000 cryptocurrencies built upon it. Ethereum is a reputable platform, while TRON has faced some controversies. Nevertheless, some see TRON as superior due to its speed and lack of “gas” prices. TRON doesn’t have transaction fees, meant to prevent DDoS attacks.

TRON 4.0 was released this month, and Ethereum 2.0 is due to release any time now. The future for both platforms is promising as they continue to evolve.

Where to Trade ETH and TRX